Get Free: Do you want to Discover 10 Unusual Secret Places to See in Rome?

Click here!
culture
Following the current covid-19 health emergency, some businesses may have changed their opening methods, so I advise you to always call their numbers or visit their sites to confirm.

Rome is packed with religious sites, but if we had to choose the 10 most beautiful churches in Rome to visit at least once in life, which ones would we choose?

In this article, I wanted to list those which, in my humble opinion, are the most beautiful and fascinating churches in the capital. In this difficult choice, I tried to range from the first centuries of Christianity, all the way up to the Third Millennium.

It represents the center of Christianity: it is an imposing basilica, which overlooks the square surrounded by the beautiful elliptical colonnade by Bernini.

2. Saint Louis of the French

The Church of San Luigi dei Francesi is the center of worship of the French community in Rome.

Within the church, it is possible to admire almost for free 3 works of Caravaggio (you should prepare a bag of coins, for turning on the lights and fully enjoying the Caravaggios)

A classic example of a Byzantine church in Rome: get ready to enjoy the wonderful Byzantine mosaics with a golden background.

This church is not particularly popular among tourists, so it has the advantage of being very quiet and peaceful.

A rare example of a Gothic church, immersed within a totally baroque city.

In the church rest the remains of Saint Catherine from Siena, and the Beato Angelico (Angelic Beatified). Worthy of note are the side chapels, the housings to many works by great artists.

Rome for Free: Here Are 10 Absolutely Must See Places in Rome!
If you want to visit and discover Rome for free, here are are the top 10 places and and things to see at no cost. Do not miss out on this fantastic list.
END_OF_DOCUMENT_TOKEN_TO_BE_REPLACED

Located near the Capitol, this church has hosted the noble Roman families in its private chapels.

Now here’s a curiosity: the gravestones are placed on the ground and are half-blanked by the incessant passing of visitors.

The floor vaguely recalls to the Westminster Abbey, in London.

Perhaps it represents the highest example of Romanesque church in the Capital.

Located near the Garden of Oranges, this church is perfectly isolated and silent.

Download my Free Guide: Do you want to explore the 10 most unusual and secret places in Rome? Really few people know about these wonderful places, and you will hardly find them elsewhere! Click here to download it for free now!

The church is placed in one of the most crowded tourists areas. It has a very original curved façade, when compared to traditional churches.

One element of relief is certainly the Cloister of Bramante, where rather interesting exhibitions are held.

In Roman times, it was the temple of Roman pagan deities, later converted in the 7th century to a Christian basilica. It has the peculiarity of being inscribed in a perfect sphere, indeed, its diameter and height match perfectly (43.44 m).

Another curiosity  is the famous forum on the top, from which, according to a legend, all pagan deities came out; others argue that on rainy days, not a single drop gets through this hole.

Speaking of the second legend, I verified in person: it seemed to me that the drops were coming in after all…

Via di San Giovanni in Laterano

A church built on a further 3 layers, all open to visitors. Going down the first stairs, you’ll come across the layer composed of an early Christian basilica, while if continuing to descend into history we’ll find some Roman houses and a mithraeum, famous for the first sentence in Latin vernacular:

After visiting Saint Clement, it is also obligatory to see the wonderful cloister in the nearby church of the SS. Quattro Coronati.

It is usually closed, so you’ll have to ask with a lot of courtesy to have it opened to you by the nuns inside.

The curiosity of this modern church is in the cement used for its construction: in fact, it is “self-cleaning” through sunlight.

It is one of the few perfectly preserved examples of a circular base Christian building.

The structure is derived from Roman temples, nymphaeums and mausoleums.

10 Must Visit Unusual Places in Rome in 2021!
If you love discovering out-of-the-ordinary locations, this article will show you the 10 unusual places that the Eternal City hides to most people.
END_OF_DOCUMENT_TOKEN_TO_BE_REPLACED

The mausoleum was built in the early fourth century by Constantine (or Constance), the daughter of Constantine.

Congratulations for reading my article entirely!

If you feel like suggesting your 10 most beautiful churches in Rome, please write a comment below, it’s free.


Tags: Alone, as a coupple, religion, with friends, With the family 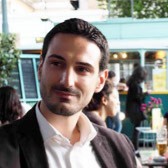 More from this Author

Roman and creator of this blog, since I love to ride bicycles for my city, the most comfortable and ecological means that exist. This blog is aimed to tourists who want to find the best to see, eat and drink in Rome. Follow me on my blog, here you will find many useful and useful tips to visit TOP Rome, I will accompany you among the most unusual and extraordinary things to do in Rome. You will be able to organize your trip to Rome! >Click here to contact me   >Find out more about me

I’m a full-blooded Roman, and I’m always looking for special places, as well as unique and fun experiences within my city.

Thank you for your time.

Don't Miss the 10 Most Unusual Places in Rome:Download free